What a hoot! Baby owls discovered at Hallen Marsh 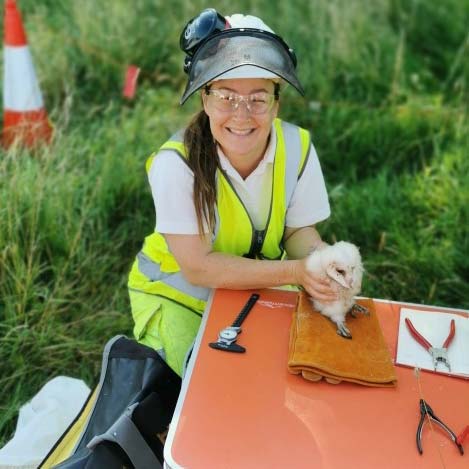 Kath said: “We installed the owl boxes away from our new wetlands working area in disused buildings and a nearby tree so they could nest without being disturbed. We are all so pleased and excited that the owls have successfully raised these three chicks.“

Kath and Ed have since ringed, weighed and determined the age of the chicks. They will send the records to the British Trust for Ornithology

Along with the new wetlands, the £80m ASEA Ecological Mitigation and Flood Defence project will provide 17km of improved flood defences when complete in 2026/2027, from Lamplighters Marsh in the south to Aust in the north. The defences will supplement existing flood barriers and help protect the area from the increased risk of flooding from climate change and rising sea levels, reducing flood risk to around 2,500 homes and businesses.

The project will boost the regional and national economy by enabling development within the 1,800 hectare Avonmouth and Severnside Enterprise Area, helping to unlock 12,000 new jobs by 2026.

Photo caption: Lead ecologist Kath Thorne with one of the baby barn owls.

Notes to Editor
The Avonmouth and Severnside Enterprise Area (ASEA) Ecological Mitigation and Flood Defence project is a partnership between South Gloucestershire Council, Bristol City Council and the Environment Agency. Funding has come from the West of England Local Enterprise Partnership, administered by the West of England Combined Authority. Other funding sources are the Government’s Flood Defence Grant in Aid, and Local Levy raised by the Wessex Regional Flood and Coastal Committee.

Find out more:
· Subscribe to our quarterly e- newsletter by emailing
ASEA@environment-agency.gov.uk

Want to stay updated with ASEA?