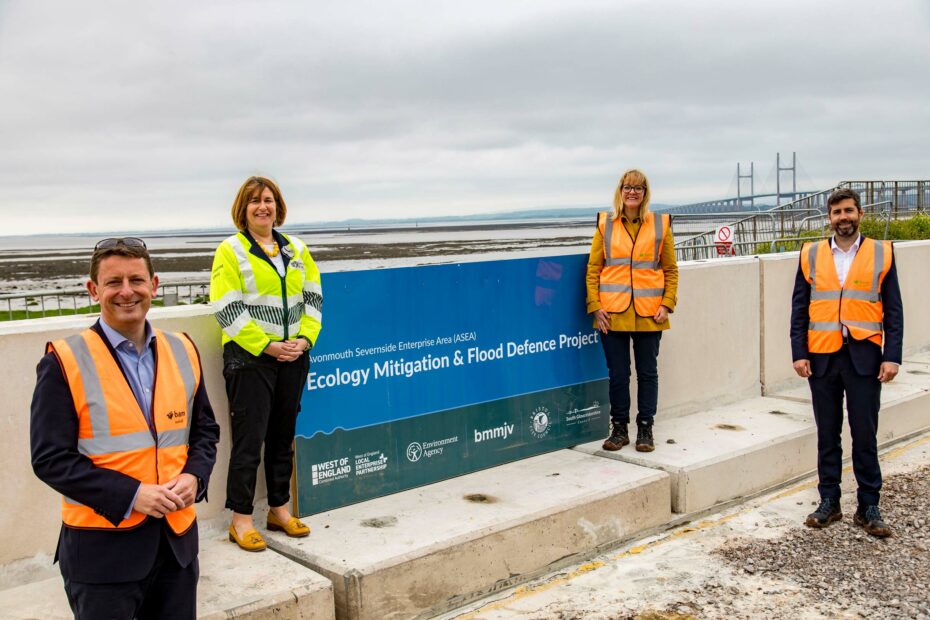 Leaders from across the West of England this week saw first-hand the significant progress being made on the Avonmouth and Severnside Enterprise Area (ASEA) Ecological Mitigation and Flood Defence project, including extensive new flood defence walls at Severn Beach.

The tour included a site to the south of Severn Beach. Approximately a kilometre of concrete flood defence wall has been placed here and to the north of Severn Beach. The walls consist of 428 units, all of which were precast offsite, meaning they were put in quickly and with the minimum of disruption.

The largest of its kind in the region, the project will provide 17km of improved flood defences when complete in 2026/2027, from Lamplighters Marsh in the south to Aust in the north, reducing flood risk to around 2,500 homes and businesses. The defences will supplement existing flood barriers and help protect the area from the increased risk of flooding from climate change and rising sea levels.

The project will also create a minimum of 80ha, the equivalent of 112 football pitches, of new wetland habitats to protect internationally important bird species, and improve walking routes.
The £80m project will boost the regional and national economy by enabling development within the Avonmouth and Severnside Enterprise Area, helping unlock 12,000 new jobs by 2026. The project is a partnership between South Gloucestershire Council, Bristol City Council and the Environment Agency.

Cllr Toby Savage said: “We’ve come together with Bristol City Council and the Environment Agency on this project to protect people’s homes and businesses from flooding. The project will also boost and restore natural environments and help people enjoy spectacular views of the Severn Estuary.”

Cllr Nicola Beech said: “It is fantastic to see the scale of the project. These defences will protect thousands of homes and make our city more resilient to climate change. Importantly, it will also provide a huge boost to nature and wildlife by creating 80ha of new wetland habitats to protect internationally important bird species in the Severn Estuary and planting hundreds of native trees that will improve the environment for many years to come.“

So far, other achievements for the project, which started work on site last summer, include:
• Flood defence wall works at Passage Road, Aust: trial embankment complete
• New wetland habitat at Northwick – nearly three-quarters of the work complete
• Progress on improvements at Cake Pill and Chestle Pill to raise the outfall structures.

Emma Baker said: “Climate change is already happening, bringing greater flood risk to large parts of Avonmouth and Severnside. This project will protect not only present but future generations and it’s really exciting to see such progress. The Severn Estuary is internationally important for its habitats for birds and over 80 hectares of wetlands will provide safe roosts for the over wintering birds during high tides on the estuary.”

Richard Bonner said: “This project creates great impetus for economic development in the region. It’s a huge boost – without it the enterprise area cannot come forward. Having the opportunity to visit the works with other partners and see the brilliant progress made is impressive. We’re really pleased to see so much being delivered.”

Want to stay updated with ASEA?